LEARN THE POWER OF PHOTOSHOP

How to Work With Layers in Photoshop Elements

Layers are a great way to build and organize your page in a variety of ways. As long as you don't flatten the image (put everything on one layer) you can continue to tweak your design until you have it just right.

The best way to describe layers is to think of them as layers of clear acetate with images on each layer. Where there is no image, the layer or layers underneath show through. 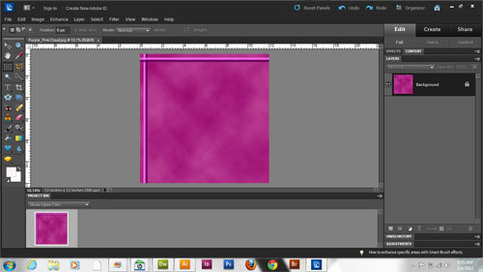 Start by opening a background image in Photoshop Elements, or use one of the backgrounds available from the Backgrounds pulldown menu on the Contents tab 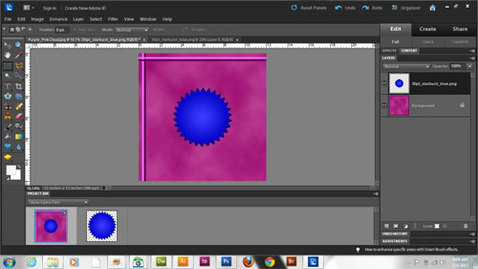 When you first open an image, it automatically comes in on the background layer.

Next we will open another image, or use a graphic or shape from the Contents tab. I used an image of a starburst I created in Adobe Illustrator. You will notice in the screen shot to the left that as I dragged the starburst image onto our background image, it automatically came in on a new layer. Because the starburst image is a silhouette, with no background of it's own, it allows the background layer to show through. 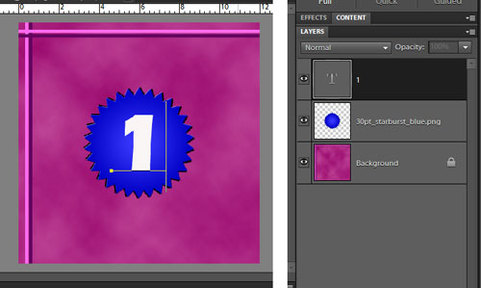 Next we can add some type. We will type a big "1" in the starburst. I used Eras Bold ITC with a size of 300 pt. colored white. Notice that as we added the type, it automatically created a new type layer.

We now have three layers. Two of the layers have transparent areas allowing the background to show through. 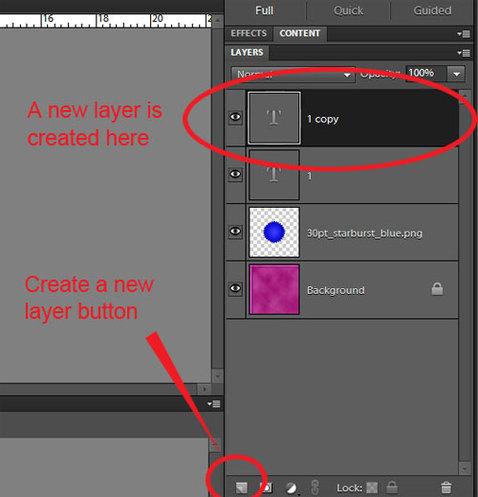 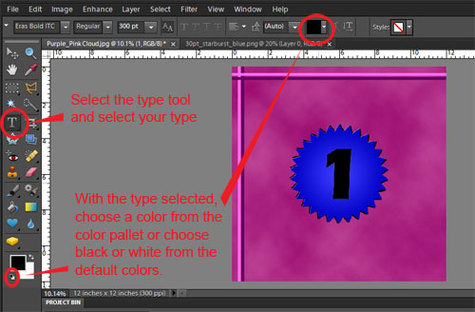 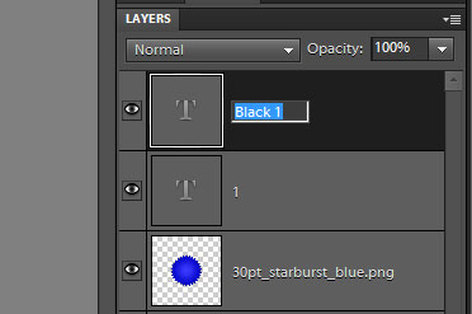 Notice that as we add layers, they may or may not be identified with what is on that layer. For example, both layers now have the number "1" on them. You can rename the layers to make them easier to identify. Just double click on the name of the layer and type in the new name. 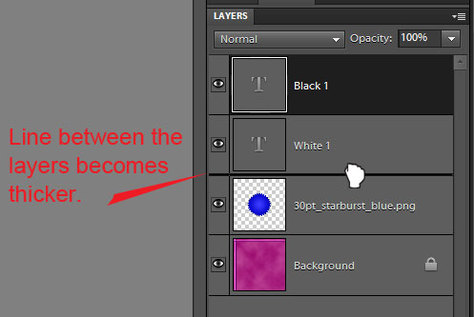 Lets put the black type layer under the white type layer. You can change the order of layers by clicking on the layer you want to move. Hold down the mouse button and drag the layer to the spot you want it to move to in the layer stack. When the line between the layers turns into a fat black line, release the mouse button. The layer will move to that position. 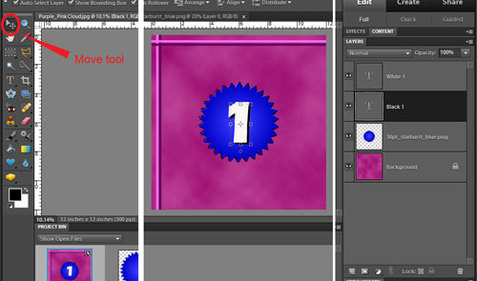 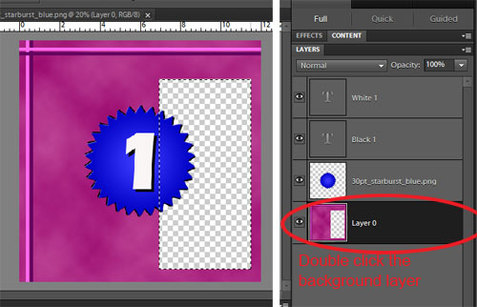 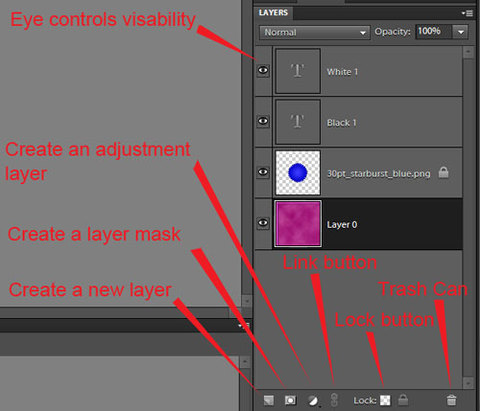 Lets look at the buttons and controls in the layers panel.
The eye next to each layer toggles the visibility of the layer on and off. To delete a layer you can drag the layer to the trash can, or select the layer and click on the trash can. The lock button will lock all the transparent pixels on a layer. The link button allows you to link two or more layers together. You can then move them or resize them as one unit. The add adjustment layer button adds an adjustment layer above the layer that is highlighted. With the adjustment layer you can control among other things the colors of the image. (See the tutorial about changing colors using hue saturation). The add layer mask button adds a layer mask to the layer (see the tutorial on Layer Masks for more information). The add new layer button does just that, it adds a new layer to the layer stack. 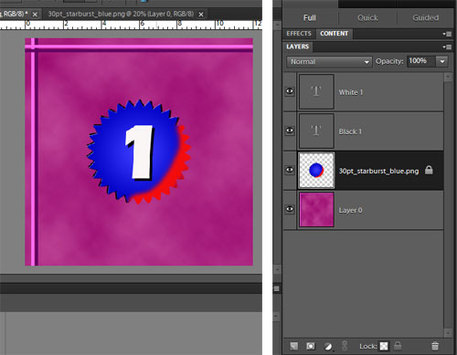 Here I locked the 30pt-starburst layer, allowing me to paint on the layer. I painted with red around the edges of the starburst, and only the starburst was changed. Without locking the layer, the red paint would have covered the background as well. 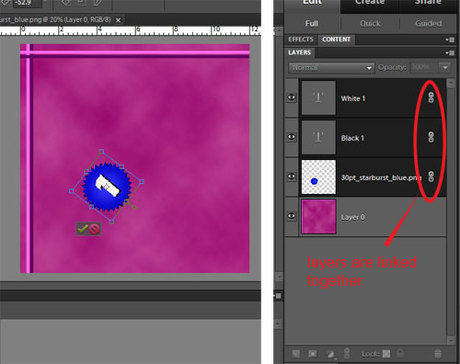 Here I selected both type layers and the starburst layer by holding down the shift key while clicking on the layers. I then linked them by clicking on the link button. Then I resized them as a group. When you finish making adjustments, click on the green check mark to commit the edits, or the cancel icon to cancel the edits. 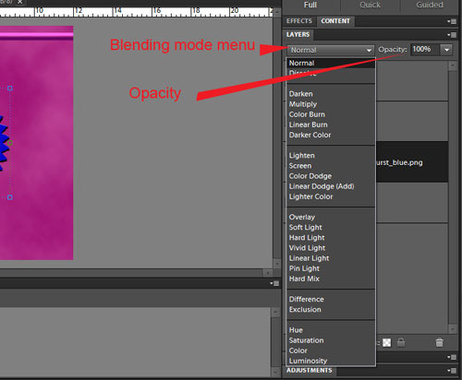 At the top of the layers panel we find control for layer blending and opacity. The blending modes are so involved they can be a tutorial of their own, a job I may tackle in the future. The ones I use most often are normal, multiply, and overlay. 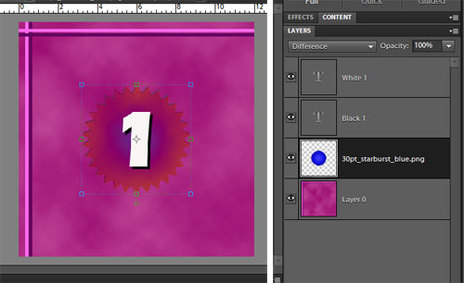 Experiment on your own by clicking on the layer you want affected, then change the blend mode. See what it does. If you don't like it, or if it does nothing, try another one. Here I tried the difference blend on the starburst layer. It created a very different effect. 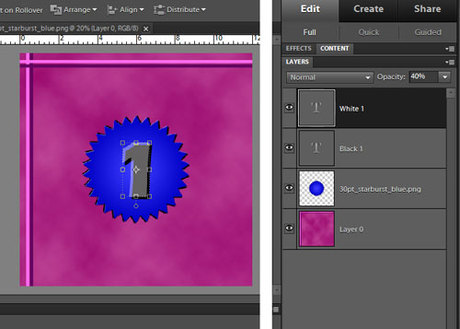 The opacity does just what it says, It changes the opacity of the layer. Here I changed the opacity of the white number to 40%, allowing the black shadow layer and the blue starburst to show through.
Summary
Layers make it easy to arrange and organize your scrapbook pages, and make opacity and blend mode changes. The possibilities are limitless. Save your layered file as a PSD. That way, if you ever want to make changes you have the layered file to work with. Then flatten the file by going to Layer - Flatten Image. Save the flattened file with a different name. I just add "_flat" or "_final" to the end of the file name. Use the flattened file for your output.

"That which we persist in doing becomes easier for us to do; not that the nature of the thing itself is changed but that our power to do is increased".